The Oglala Lakota man Crazy Horse had a final vision in which “He saw his people being driven into spiritual darkness and poverty while the white people prospered in a material way all around them. 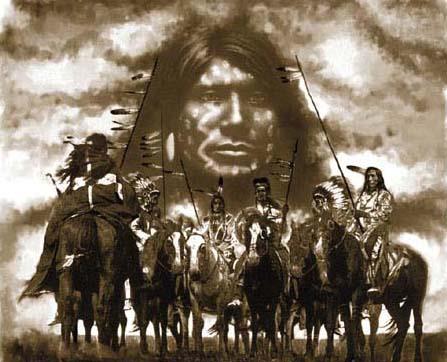 But even in the darkest times, he saw that the eyes of a few of his people kept the light of dawn and the wisdom of the earth, which they passed on to some of their grandchildren.

He saw the coming of automobiles and airplanes, and twice he saw the great darkness and heard the screams and explosions when millions of people died in two great world wars.

“But he saw, after the second great war passed, a time come when his people began to awaken, not all at once, but a few here and there, and then more and more, and he saw that they were dancing in a beautiful light of the Spirit World under the Sacred Tree even while still on Earth.

Then he was amazed to see that dancing under the tree were representatives of all races who had become brothers and sisters, and he realized that the world would be made new again and in peace and harmony not just by his people, but by members of all races of mankind.”

Joseph White Eagle is a Cree spiritual leader and teacher of traditional Native wisdom medicine who grew up in Saskatchewan and now lives in British Colombia with his wife and family. We are deeply grateful for his contributions to Bird Clan Messenger and to all of humanity. A’ho.

Get more information about the 7th Fire and 8th Prophecies here. And here.

Like Loading...
‹ Welcome to the Great Awakening
Cloud Spencer Eaglebear: The Red Road of the Spiritual Path ›

If you appreciate our work, please consider making a donation to help us with our expenses. Chi Miigwetch.

“The most powerful person in the world is the storyteller. The storyteller sets the vision, values and agenda of an entire generation that is to come.”